Why open your pockets to pay homage to a mere sheep?

Last Saturday, I finally had the chance to show off some of what I brought here from New York: the slinky black trousers, my hand-painted jacket, and my fancy necklace. We had two of the 200 tickets to the sold-out Bighorn Bash, which is probably the hottest gala in town.

The minute I got through the door at the Headwaters Center, I realized what I’d left behind: My good sense. Nobody cares about my big-town duds. In Dubois, it doesn’t matter what you wear. What matters is who you are.

Again this year, I asked myself what it is that creates the wonderful clamor at the annual Bighorn Bash (which supports our own home-grown educational institution, the National Bighorn Interpretive Sheep Center). The meal ticket alone is $35, a fairly hefty sum for many people here. But the goodwill in the big room at the Headwaters is palpable during that event.

The Official Speakers orate over the hubbub, and people gasp and roar during the live auction, as bidding escalates beyond the point of reason for items bearing the image of our favorite elusive animal. Leigh paid thousands for a smallish wall hanging (and then donated it back). The anonymous $1900 bid for the little box with a ram’s head carved on ramshorn was officially deemed to be unsatisfactorily low. A few pounds of fresh-caught seafood went for hundreds.

“I wish I was that rich,” said someone at my table. I knew she didn’t mean she really wishes to be wealthy. She meant she wished that she too could afford to bid outrageously high for the benefit of the Sheep Center.

Not only did I not get why this particular event is so popular; the bighorn sheep was never very high on my list of things to love about Dubois. We joined the Sheep Center out of general goodwill, but I have always focused instead on the incredible scenery here, the history, the geology and archaeology. On individual residents and the community spirit in general.

Why do they get so excited about a mere sheep?

The next morning, waking to yet another stunning Indian summer day, we decided to go out beyond the reach of hikes in our ATV. “I’m going to take you somewhere you’ve never seen,” said my husband, who spends more time on the four-wheeler than I do.

He drove me out to the East Fork, that wonderful region far on the other side of town where I first fell in love with this territory, while staying at a dude ranch. We climbed up beyond the undulating red rock hills to a nearly barren, windswept ridge where we were higher than the eagles fly.

When the rocky track petered out, he turned off the engine and led me out to a precipice. As John Denver once eloquently sang, I saw everything as far as I could see. The river was way down there, dizzyingly far below my feet.

“It doesn’t get any better than this,” I said, but he didn’t hear. He had already walked back to the ATV and turned it around.

Almost as soon as we started off, he turned the engine off again. Instantly, I understood what had escaped me before. 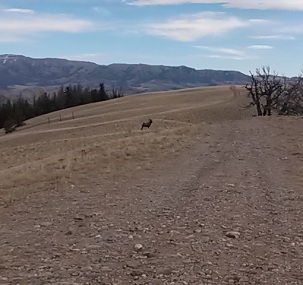 There, directly ahead, was a lone ram. He stood silent and erect, wearing his elegant pair of heavy horns like a crown.

He turned and looked at us for a moment, then strode off across the track and down the slope on the other side. He had the bearing of a landowner graciously ignoring two trespassers.

He and his family roam easily the places where I can venture only with great difficulty, or not at all. This landscape we love with such passion is his kingdom. That’s why.

You can see new entries of Living Dubois every week if you sign up at the top of the right column at www.livingdubois.com.

One thought on “The Beauty of Our Favorite Beast”