A new trekking club in Dubois WY is named after an early businesswoman of note if not distinction.

For nearly a decade, I’ve usually hiked these hills alone. In only the past year, I’m pleased to report, I’ve found many women to join me in exploring the delights of the Wind River Valley.

More accurately, they’ve invited me to join them. Today I headed for the hills on snowshoes with six other women, most of whom moved to Dubois within the past few years–from Oklahoma and Louisiana, Massachusetts and California by way of Arizona, and in one case back living in Dubois again, after leaving town for a decade to explore the country by RV and considering many other locations in which to settle permanently. Here they are

Members of the ladies’ trekking club propose to call ourselves Mabel’s Girls, after the local name for the large hill that looms over our homes. Perhaps my favorite hike is the steep climb up the public land on the northeast side of Mabel’s Hill, which rewards you with a spectacular view of the Dunoir Valley when you reach the long high plateau at the top.

In 1932, one of Dubois’ early entrepeneurs, Mabel McFarland, opened the Long Creek Ranch and Tavern along the highway just off the highway at the western end of the hill. For many years, the tavern was popular with local cowboys and loggers as a place to stop for a drink and entertainment after a hard week’s work on the range or in the mountains.

One friend told us that when he was working on a ranch nearby many years ago, he and his buddy would occasionally ride over to Mabel’s at the end of the day, penniless and thirsty. She would stake them to one beer each and then boot them out.

Mabel features as “one of the most memorable characters” in Mary Allison’s iconic Dubois Area Local History. A photo shows Mabel standing in front of her establishment wearing trousers and a blazer, smiling, her windblown hair framing her face.

“There were many who remember those fun days,” Mary wrote, “particularly when the Dubois Roping Club ended up at Mabel’s for drinks and dinner. She was a great hostess and lots of fun.”

I have not taken time to track her history further, but I have heard that Mabel opened her new tavern 15 miles to the west of Dubois after locals who objected to her business forced her out of town. There are reports of cat-fights on the bridge in the middle of town between women who supported Mabel’s business and others who opposed it. But this is all merely hearsay.

Dubois Area History reports that Mabel’s tavern was badly damaged in a dynamite explosion in 1957, and burned to the ground in 1958 or 1959. There are those who say that a stone fireplace visible from the highway at the base of the hill stands as a reminder of the tavern, but our ex-cowboy friend disputes that this was the exact location.

Mabel’s Girls has no formal standing as an organization and no bylaws. But we have discussed the terms under which we might allow men to join our treks. Some members of the club joke that we should charge them for the privilege, or at least require them to break the trail.

We also note the charming exhibit currently on display at the Dubois Museum, which features dolls made from vintage clothespins depicting noteworthy women in Wyoming history. Members of Dubois’ Top of the World Homemakers Club hand-crafted the dolls in 1989, in honor of Women’s History Month.

You see Sacajawea at lower left in the image below. The first female judge in Wyoming is included, as well as the first woman to vote in Wyoming and a female doctor who dressed as a man to avoid attracting attention and unwanted comments.

Mabel McFarland is not among them. 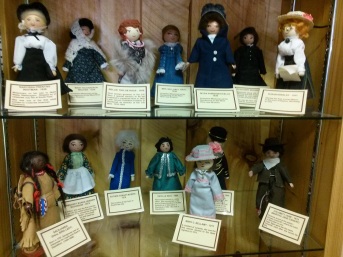 Perhaps the women who inspired the dolls are better role models for the little girls most likely to enjoy seeing them. But as one member of Mabel’s Girls commented during our winter trek today, it just wasn’t so easy for a woman to start her own business back in the day.

And without a doubt, women like Mabel were also part of the history of the West.

Want to read more about living in Dubois? Sign up at the top of the right column.