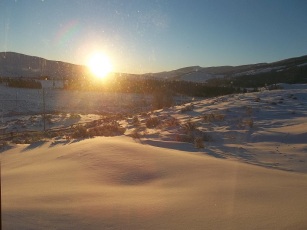 Holidays in the city were crowded with strangers and the nerve-jangling noise of false holiday cheer in background music. Here, there was the crunch of snow, and abundant visits from animals we seldom see, who for a change came down to where we live.

It seems to be the time of year to count creatures. With the hunters gone, Wyoming Game & Fish has been out scouting for deer, and reports that the deer herd in Dubois is healthy and growing steadily. (We could have guessed; they seem to own the highways, to know how to look both ways, and often strut across with the you-slow-down-fella insolence of New York jaywalkers.) The mule deer population outnumbers the town’s by 50%.

A new pair of (human) friends who are also spending their first full year in Dubois stayed outdoors all of New Year’s Day in Crowheart  counting birds, as part of the Audubon Christmas bird count.

“It was wonderful,” my friend said the next day.”We saw 20 different species, and a lot of waterbirds I’d never seen before, as well as bald and golden eagles and two kinds of hawks.”

This was the second Audubon Christmas bird count in the area; another one took place a week before Christmas.

I see that the Audubon web page features a child from Wyoming.

The large four-footed beasts may get more press, but Wyoming has been in the forefront of protecting birds. It was the first state in the nation to adopt legislation to protect songbirds, according to an article in last month’s Wyoming Wildlife.

I too have been keeping track of birds. Here’s my unofficial count:

On Christmas night, after playing Yahtzee with some friends, my husband gasped as he walked out the door ahead of me. Strolling past in the driveway was a huge, young moose.

He ambled silently past with the arrogant gait of a teenager in ski boots, ignoring us completely.

I didn’t have a camera or the presence of mind to take a picture, but Ree Brown Beavers of Wind River Property Group did the other day, when a similar fellow came into her back yard. He looks a lot like the one we saw.

You don’t normally mess with moose, and I’ve never seen one so close.

Another impressive visitor had turned up a few days before Christmas, early in the morning. We heard an unfamiliar, repetitive noise coming from the valley. It took us a while to spot him. 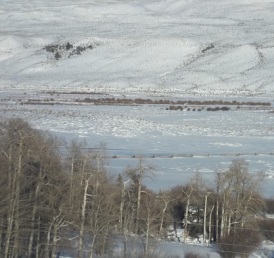 A lone wolf stood facing west, toward this barren aspen grove, howling piteously. We assume he had been tossed out of his pack and was out in search of a new mate. It’s that time of year for wolves.

We don’t mess with those critters either, and this is the first wolf I have ever seen here. We don’t ever hear them, either, but we hear about them, and not often in a sympathetic way.

This fellow did tug at my heart strings, but those were not the ones he wanted to reach. After a while he gave up and trotted on up the valley.

© Lois Wingerson, 2017
You can see new entries of Living Dubois every week if you sign up at the top of the right column at www.livingdubois.com.