Only one highway runs through Dubois WY, and slowly. But another one, invisible, is very speedy. Accidents are exceedingly rare.

Living in one of the most remote towns in the United States has many advantages. One of them, incredible as it may seem, is virtually flawless Internet service. Here’s why.

The picture at right shows Michael Kenney’s whimsical clothesline, made from really old telephone poles and transformers. It’s funny because Michael, who is the head of our local telephone company (DTE, for Dubois Telephone Exchange), is one of the most forward-thinking and progressive people I’ve ever met. In charge of a rural phone company, he long ago began to see beyond telephones.

Michael has been a prime mover in the national effort to bring broadband to rural areas. The golden thread I’m using to transmit these words right now is a shining example of his success.

The Internet service here is fast and reliable. We watch movies on Netflix all the time, virtually without interruption. I can’t remember when I last lost service while working on a website.

Before my retirement last June, I telecommuted from Dubois and from my home in New York City for 8 years. Working in the city was a nightmare, even though we used one of the largest Internet service providers, Time Warner Cable. Service would wink out unpredictably, and customer service reps (who obviously didn’t know Brooklyn from the Bronx from Bangalore) would apologize incessantly and ineffectively. They hadn’t a clue. I became a regular at the library and at Starbucks. 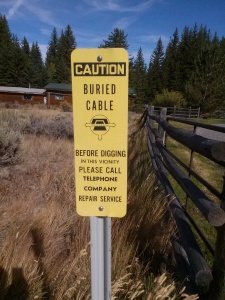 Here in Dubois, one Friday evening several years ago I ran into Michael at happy hour at the Rustic Pine Tavern. I mentioned to him that my Internet service had stopped at about 3:30 (no problem, because I worked on Eastern time and that was the end of the work week back in Norwalk).

“A backhoe ran over a cable in Cody,” Michael said. “It will be fixed in 3 hours.”

Michael’s minions spent last summer laying fiber optic cable over the pass, working right past our house. Now there are multiple redundancies, Michael told me recently. If our line fails, another one will kick in. These days, the Internet never kicks out.

By the way, DTE has been running a webcam for many years at the spot in the middle of Dubois where the highway hangs a right-angle turn. This is an easy way to get a quick feel for the other kind of traffic that passes through here (much more slowly). You can watch it at http://webcam.rangefamily.net/~dubois/ .

Want to read more about living in Dubois WY? You can read weekly updates via email using the link at the top of the right column.